courtesy the Mawaka family
Toby, a 6-year-old Boston terrier, died in 2012 after his owners say he was sickened by chicken jerky pet treats made in China.
From the Dog Channel to the stories being shared across the Internet, there is no clue yet in solving this problem.  But who do they name as the main culprit?  CHINA!   And I'll tell you why and what will be done about this mess further down in this article.

Some news reported by the Dog Channel (and other reports out there)
"Most of the pet illnesses reportedly involved chicken jerky, but advisories were extended last year to duck and sweet potato jerky treats. Jerky-wrapped rawhide and jerky paired with dried fruit or yams have been flagged as well.

The testing of more than 1,000 jerky samples over the past two years has looked for the presence of everything from pesticides and mycotoxins to irradiation markers and toxic metals.

"Testing has also included measuring the nutritional composition of jerky pet treats to verify that they contain the ingredients listed on the label and do not contain [other] ingredients,” the FDA stated.

The agency stopped short of advising consumers to eliminate jerky from their pets’ diet.

"Jerky pet treats should not be substituted for a balanced diet and are intended to be fed only occasionally and in small quantities,” the FDA noted.

The agency asked veterinarians who suspect a jerky-related illness to document it on the FDA Safety Reporting Portal and possibly provide samples to the Veterinary Laboratory Investigation and Response Network (Vet-LIRN).

The agency recommended that veterinarians who submit a case conduct a routine urinalysis after freezing a subsample of 10 milliliters. In addition, veterinarians who suspect liver or kidney injury should obtain routine blood work for possible FDA investigation."
Please read MORE details of all of this HERE. 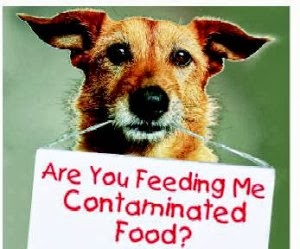 What's the matter with CHINA and pet food?

"The jerky was sold as jerky tenders or strips made of chicken, duck, sweet potatoes or dried fruit. Most of the treats were made in China.

The FDA said the illnesses have been linked to many brand names of the jerky (none of which it named) and most commonly involve chicken or duck jerky treat or jerky-wrapped treats.

The FDA did not list brand names of the jerky or names of stores that may have sold the treats. The agency said there doesn't appear to be a geographic pattern to the case reports.
Within hours of eating the jerky, some pets exhibited decreased appetite, decreased activity, vomiting, diarrhea (sometimes with blood or mucus), increased water consumption and/or increased urination, the FDA said.

The illnesses involve many sizes and ages of dogs and multiple breeds, the FDA said.

Since 2011, the FDA has tested more than 1,200 jerky pet samples for a variety of chemical and microbiological contaminants that may cause the illnesses reported in pets, from antibiotics to metals, pesticides and salmonella.
"To date, none of the tests  have revealed the cause of the illnesses," the FDA said."

The agency did inspect facilities in China that manufacture jerky products associated with some of the highest numbers of pet illness reports, but that did not identify the cause of illness."
MORE:   http://www.jsonline.com/blogs/news/228820701.html

Well, tomorrow I'm going to share with you the importance of making your own treats.

I leave this book recommendation for you from one of our articles and tomorrow I will bring even more and some recipes!! 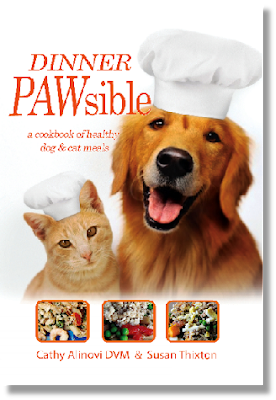 Buy your copy and LEARN as much as possible at:
http://www.dinnerpawsible.com/

Day 22 of the UBChallenge!
Posted by Carolyn M at 8:38 PM No comments: