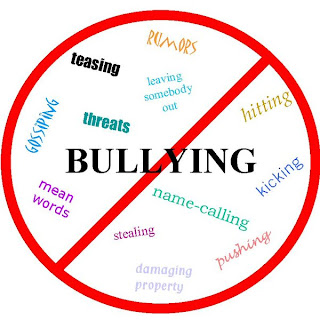 I've watched Friday, Sept. 17th 48 Hours Mystery about School Bullying.  I'm sure that many of us remember being bullied or our friends being bullied in school or maybe our children being bullied.  It's a horrible thing and this show first showed a boy (with long hair) who preferred to sit with the girls and do "girl things" and had to transfer to his third school until something could be done about it.  The boy's mother got proactive about the situation and found out that once she brought it to the school's attention they would actually do something about it.   She met with other mother's whose child(ren) were being bullied.  She spoke at the school and asked the children who had been bullied or knew of someone being bullied and she found out that what started at 30% of the school rose to 70% of the school.   The teachers were placing placards like this one in their classroom and talking with the kids about talking to the teacher if anyone of them are being bullied. 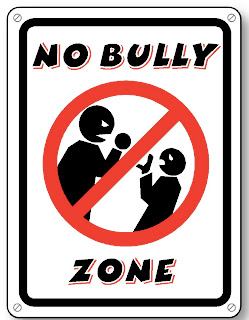 The first boy I'm speaking about actually said that he felt like killing himself.  He already causing self injury to himself by cutting himself and hurting himself.  Thankfully his mom stepped forward and did something about it!

If you have any doubt that bullying kills then get a ticket to this play, The Bullycide Project and it tells the story of 150 children who took their lives since 1973 because they didn't think anyone could do anything about it.  Often the parents of these children are in the audience.  So many parents didn't know this was going on so they couldn't do anything.  But now they know and can do something.

One gal, Jessie was tormented horribly.  And no one did anything about it, her friends failed her.  Then she did one thing that couldn't be undone.  She took a picture of herself naked and put it in a text.  And then she was attacked unmercifully.  A policeman told her that it would be a good idea to go public.  So she went on TV.  After this the attacking got worse.   People were spitting on her and hitting her.  One night she attended the funeral of a fellow student who had taken his life because of bullying.  That night she went and hung herself.  An awful tragedy.

Determined that something positive happen, Cynthia Logan went before the Ohio State Senate calling for a passing of the Jessica Logan Act...  an act to protect the children.   A mother there shared about her daughter being bullied in school and online.  The bullying started when she was 6.  It was in her daughter's 4th grade of school when she realized what was happening at the Catholic School she was attending and they did little to help her.  Tara was transferred in 5th grade and the friends from Dara's old school told her new friends how she was hated and then the new friends became haters too.  On FaceBook a group of kids started a Dara Hating group.  Horrible things were written about her.  The mother spoke to Dara about not hurting herself or killing herself and Dara shared that she would never do that.

Jacob, another boy interviewed shared where all the bullying "hotspots" were in his school.  He shared how in dodge ball people gang on some and just hit them like crazy.  He also shared that when kids share about it they get it worse.

Middle school tends to be the worse.  This is when hormones are raging, cliques are formed, friendships seem more important than anything else.   Is this ringing some familiarity to you?

Dara's mom turned to Dara's principal and she turned in pages of documents and said it was bad but he said that he needed proof at school to do something.  He talked to the girls at school who were doing the bullying.  But nothing was done to punish them.  The mom became obsessed with finding out anything she could to help her daughter... online and offline.   She found out that one of the horrible things she found out is that children under the age of 13 are joining facebook.  Facebook says that they are aware of the problem but that they currently can't do anything about it.  Dara's mom took her off of FaceBook.

What's the law in your state about bullying?  Go to http://cbs.com/bullying

I was happy to find a number of good resources online to help with school and online bullying and here are some of them: