Cracks in the bond between faith and politics: "Raised Right" 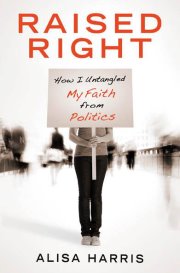 Alisa Harris is the author of Raised Right: How I Untangled My Faith From Politics. Alisa covered education, poverty and cultural issues as a journalist in New York City, and currently works in nonprofit development.  Alisha's work is a Memoir in which she details her journey to separate her political views from her Christian faith. 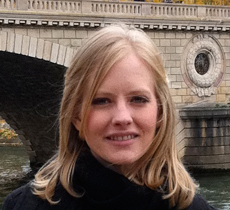 Alisha (pictured above) grew up in an Ultra Conservative-Republican household.  Some might call her family an extension of the Moral Majority. She accompanied her parents in protesting loudly outside of abortion clinics when she was a child. She had been immersed in the think tank that only the leadership of the Republicans would bring about the change that this country needed.  She began to question this line of thinking when she went away to college.  She didn't question her faith in God but rather why her faith was so heavily linked to the Conservative Republicans.  Her realization became that of understanding that God wasn't represented by Republicans or Democrats but rather a loving God who died for our sins, the sins of those who engage in homosexuality as well as the person who hates homosexuals, those who abort their babies as well as those who are burning down abortion clinics and many more who needed the Lord as their Savior.
I found myself using a yellow hilighter to mark passages of this book that spoke directly to me and some of the quotes from the book that especially remain with me are the following:
"Love in action works for the unwashed and hungry people who are waiting in the pools of rain and soggy trash.  The world as a whole may not change, but our neighbor's world, and by extension ours, grows brighter--- even when breaking loaves of bread in the rain." (p. 27)
"I was done chasing supermen. I had stopped believing in the perfect leader who could say 'Let there be justice' and by the force of his word change the whole earth into heaven. Instead I determined to grab hold of the truth I’d always known – that the Leader had already come, had chosen instead to say, ‘My kingdom is not of this world,’ and had been despised and rejected because His message was bigger than the first-century political pundits had predicted. When Jesus said to go the extra mile and turn the other cheek, He called us to subvert tyranny with love and redeem injustice with suffering. He didn’t say that tyranny and injustice would cease immediately, but He promised that the time would come when the meek, the poor, and the merciful would inherit the earth.” (p. 75)
My opinion:  It's hard to judge a memoir and I'm not about to do that.  This book reminded me of my very strict Christian upbringing and where the only word that was righteous was a Republican and all Democrats were sinners.  I was forced to go to Christian Jr. and High School and it was the "will of God" that I was there.   I wondered if this book would end with this gal running fast from her faith and turning against God but it didn't.  I  know that in my own life it wasn't until I learned later on in life (in my college years) that your relationship with Jesus Christ is very personal and there are no rights or wrongs about what political party you embrace and that you need to decide to do God's will and everything else will follow.  I would recommend this book to any young adult or adult questioning faith and politics.

Email ThisBlogThis!Share to TwitterShare to FacebookShare to Pinterest
Labels: Alisha Harris, Cracks in the bond between faith and politics, How I untangled my faith from politics, Raised Right
Newer Posts Older Posts Home
Subscribe to: Posts (Atom)