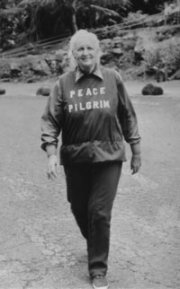 I am sharing the giveaway of the BOOK, "Peace Pilgrim" and the booklet by Peace Pilgrim called, "Steps Toward Inner Peace," with separate winners!  I am sharing the book with one winner and then the three booklets with three separate winners.
Be sure to have done all the MANDATORY items on there and write what the comment question is about and please NO email addresses in the comments.  I don't want you spammed by someone who may come trolling looking for addresses to spam.  You never know who is reading this.  Thanks for understanding.
Peace Pilgrim (July 18, 1908 – July 7, 1981) born Mildred Lisette Norman, was an American pacifist, vegetarian, and peace activist. In 1952, she became the first woman to walk the entire length of the Appalachian Trail in one season. Starting on January 1, 1953, in Pasadena, California, she adopted the name "Peace Pilgrim" and walked across the United States for 28 years. A transcript of a 1964 conversation with Peace Pilgrim from a broadcast on KPFK radio in Los Angeles, California, was published as "Steps Toward Inner Peace". She stopped counting miles in that year, having walked more than 40,000 km (25,000 mi) for peace.

Mildred Norman Ryder was born on a poultry farm in Egg Harbor City, New Jersey, in 1908, the oldest of three children. Her mother, Josephine Marie Ranch, was a tailor, and her father, Ernest Norman, a carpenter. Although poor, the family were well-thought-of in a community of German immigrants, whose relatives originally settled the area after escaping Germany in 1855.  In 1933 she eloped with Stanley Ryder and moved to Philadelphia in 1939. They divorced in 1946.

Her pilgrimage spanned almost three decades beginning January 1, 1953, in Pasadena, California. The Korean War was in progress. She continued walking for 28 years, spanning the American involvement in the Vietnam War and beyond. Peace Pilgrim was a frequent speaker at churches, universities, and local and national radio and television.
Source
Just go to this link for the Rafflecopter and Comments:  http://doingrandomactsofkindness.blogspot.com/2012/04/peace-pilgrim-book-and-booklets-review.html
Posted by Carolyn M at 5:53 PM No comments: